Is finding a replacement for your current broadcast monitoring and compliance solution on your to-do list? According to a recent survey we conducted, 73% of respondents are looking to do so by the end of 2020. Of those looking to replace their current broadcast monitoring and compliance solution by the end of 2020, 75% are specifically looking for a Volicon replacement (meaning, they’re using Volicon today).

During your research, there are several questions you should ask yourself about features. (For tailored questions you should ask based on your organization type, read how three broadcast industry professionals—one at a cable company, the second at a local TV station group, and the third at an MVPD—would evaluate their next broadcast monitoring and compliance solution).

1) Do I need loudness monitoring?

In the United States, the CALM Act regulates the audio of TV commercials in relation to the TV program they’re accompanying. Having automated tools for finding loudness problems and being alerted whenever there’s an issue is immensely helpful.

2) Do I need audio metering?

The  Multiviewer in SnapStream Monitoring & Compliance—with audio meters turned on.

You might need to monitor audio levels without listening to the audio. If so, make sure your new solution lets you quickly determine audio levels for multiple feeds at a glance.

3) Do I need closed captioning monitoring?

The FCC dictates that TV stations, cable and satellite providers, and program producers are responsible for closed captioning compliance. If your organization is found to be out of compliance, the fines can add up—the FCC considers each episode of a program with defective captions to be a separate violation. It’s vital to have a tool that can help you verify that your closed captions ran as they should have.

4) Do I need to analyze ratings?

If you get ratings data from Nielsen or other providers, you can import that data to help you visualize it and analyze ratings performance for your content. For example, you can compare how different channels perform over specific times and dates to gain additional insights, such as whether you might have gotten low ratings on one channel because the majority of your viewers were watching another channel during that time period. 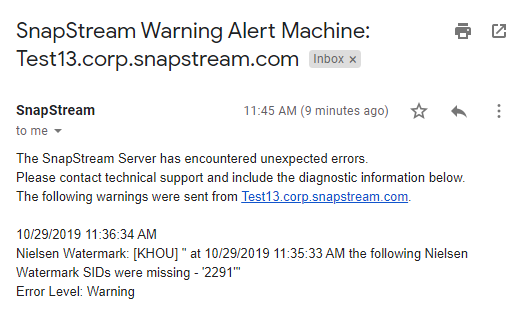 An alert from SnapStream Monitoring & Compliance about a missing audio watermark.

6) Do I need SCTE-35 message monitoring?

If you work at an MVPD, you’ll want to be notified if there aren’t any commercial messages in the stream. If it gets to the point where a broadcaster sees an ad not run, the broadcaster will contact you saying they didn’t get an avail message for that ad. Then, you’ll need to be able to easily jump to the date and time in question to look for the splice_insert for that particular avail.

If you need to prove to advertisers that their ads ran, it’s important to have a tool that lets you easily find specific ads in the as-run logs, create clips, and directly email advertisers those clips.