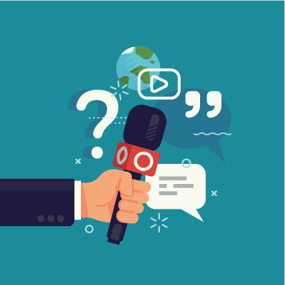 Over the past decade, the delivery methods for journalism have changed significantly. As traditional delivery channels, like the newspaper, get consumed less frequently, news organizations have had to change how they reach their audience.

SnapStream recently met with John Battelle from The Recount. Calling upon his successful career, John shared his thoughts and ideas about modern journalism. John’s team was a pioneer in providing digestible, engaging information in the form of short videos on the internet. His method has spread like wildfire and provided significant interactions and engagement.

With massive changes in broadcasting and journalism, many problems have arisen. We discuss, six main concerns that need to be examined to ensure a fair and adequate approach to sharing the news:

With more people having access to information sharing, more misinformation is shared than ever before. Media is now out of the hands of the passionate experts that founded their careers on active research and understanding. As this new wave of media has taken over, anybody can share information, and that information can spread among the masses. John details:

“Journalism has essentially been hijacked by extremely sophisticated and sometimes unsophisticated disinformation and misinformation campaigns,” John continues, “You have the ability to create missing disinformation and then distribute it as quickly as that clip we were talking about, which is, in fact, journalism, that every frame of that clip has been verified to be true and accurate. When you have that kind of speed where 100,000 people can see something in half an hour, and then 10 million people can see it by the end of the day - you have something that is a very big concern.”

Misinformation goes beyond poor journalism and internet trolls trying to get a rise. In fact, it can occur when a team doesn’t fully understand or convey the context of a clip or photo. The context behind each source is as important, if not more important, than the source itself.

John weighs on the importance of ethics in journalism:

“There’s actually no secret to it. It’s just called editorial standards. This is what every newsroom has, and hopefully always will. You want to make sure you’re not pulling things out of context and that you’re delivering accurate information. And if you have a process by which you get it wrong, you acknowledge that and correct it.”

Today, people can consume information directly from social media. Because of this, there is a broadening chasm in content sources, driven by the individual consumer. This can create siloed thinking and foster source bias.

For example, if an individual appreciates the information shared from one particular source, they can “subscribe” to it and see everything else that source shares. People often subscribe to networks and information producers that support their political, moral, or ethical beliefs. This results in them no longer consuming information that doesn’t support their bias.

According to Helpful Professor:

“Without the need to have widespread mass appeal, new media target dispersed niche and ideological markets. Conservatives begin to only consume conservative media; and liberals only consume liberal media. People begin to only reinforce their personal views, causing social polarization.”

Of course, this presents a significant issue and pushes people of various views further apart. People are less apt to consume information that doesn’t support their beliefs, resulting in them becoming more polarized.

With streaming and new delivery mechanisms for media, the way news sources get paid also had to change. Traditionally, there were two revenue streams for linear television. Says John:

“One of them is cable carriage. So CNN gets paid a lot of money by the cable operators to run CNN on the bundle that they’re selling to their cable subscribers. The second, of course, is advertising.”

Both traditional streams of revenue resulted in getting paid to be included - not watched. As long as your station or show created enough hype to get people interested, then you would see a paycheck coming in. This, however, has changed dramatically with modern television.

According to John, modern media follows a new model:

“What we need, and fortunately, what we have is venture capital, which is risk capital that is willing to pay for the costs of making what you make. The revenue models start to get established in a turbulent and disrupting market. That’s exactly what television news is right now. That doesn’t mean we don’t have any revenue. We have event revenue, newsletter revenue, and revenue on social platforms.”

However, monetization in modern media isn’t perfected by any means. It has a long way to go. John states:

“I think individual creators should be able to make as much money as possible. But the truth is that media companies are very important players in the platform space. And to date, platforms have done a terrible job of supporting at-scale media companies. So, hopefully that’ll change over the next few years.”

John also touched on the hope that advertising revenue will eventually be more readily available.

With traditional media, there were major players in the field, and small-time media outlets had a difficult time coming up. Though this was bad news for smaller outlets, it managed the amount (and quality) of information that the audience received. People weren’t as bombarded with news and didn’t require to sift through several different sources to find the truth.

With modern media, there is heavy competition. Any individual or small media company can suddenly share information to the masses. As recently stated, this has led to significant sharing of misinformation. However, it’s also created an unhealthy consumption for the average consumer.

According to Helpful Professor, “Small websites with fresh takes for niche audiences popped up, crowding the market with information. In this crowded media market, there is competition in all niches, and brands need to have a fresh take to get attention.”

This results in seeking an angry captive audience instead of truthseekers. John stated:

With moving online, news sources have had to say goodbye to old tools, resources, and software. News outlets now have to adapt to taking their business online. This includes an entire new set of technology to ensure their production goes smoothly. John discussed some of the struggles that The Recount Media has had in transitioning and areas that other outlets might face issue

John continued on to discuss some of the software he’s implemented for a smooth transition, including Slack, the messaging system:

“As a matter of fact, we’ve built on top of Slack, a production system, which automates a lot of our posting, publishing, arching, and certainly all of our editorial conversation around this clip and that clip. Slack is literally at the center of how we produce.”

For new players in the game, finding software solutions and adapting to new technology might be difficult, but it’s a necessary movement for the success of the business.

Now, more than ever before, children can access inappropriate news and information. In traditional media, adult-appropriate content would be shown in the evenings, when the children were to be in bed. Media powerhouses were careful to share appropriate information to keep their broadcast family-friendly.

However, with social media being inundated with haunting news and unfortunate events, children can gain access to photos, text, and videos. Helpful Professor weighs in, “As children have greater access to adult information, the innocence of childhood is being decayed earlier than ever.”

Needless to say, modern media has a long way to go before matching the strength, power, and editorial standard of traditional media. Despite this, there are several positives to there being a change of consumption and sharing. In order to ensure a more stable media future, outlets and individual creators must be aware of the six downfalls, and work together to combat them.

Check out our article on how source bias impacts online media engagement and answer the question - was Marshall McLuhan right? Is the medium really the message?