SnapStream Gets an Awesome Shout-Out on The Roula & Ryan Show on 104.1 KRBE

If you haven't seen it yet, you seriously need to watch Brian Williams rap "Baby Got Back," which has racked up more than 3.8 million views on YouTube and counting. All of these Brian Williams raps have gone extremely viral, because they're just plain hilarious, with "Rapper's Delight" topping them all with 11.9 million views. Whoa baby.

So, back to the radio show: SnapStream was surprisingly brought up in this context and we thought, "Cool, they're talking about us on the radio!" Our TV search and clipping technology is known as "the secret weapon" to creating satirical clip montages at "The Daily Show with Jon Stewart," "The Soup," and "The Colbert Report."

While "The Tonight Show Starring Jimmy Fallon" is not a SnapStream customer (yet), they totally should be! They could crank out these Brian Williams raps at a furious pace if they were using our ridiculously fast TV search. Just sayin'.

Take a listen! (SnapStream's mentioned around 2:15 in the clip.)

And thanks again to the team at "The Roula and Ryan Show" for the amazing shout-out on the air, in our shared hometown of Houston!

A few weeks ago, I started noticing billboards around town (here in Houston) for a SnapStream customer, the Kidd Kraddick morning talk radio show: 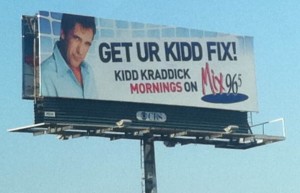 After exchanging a few emails with their operations director, I got this update from them: