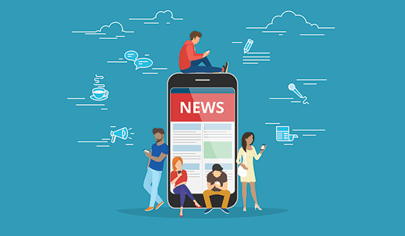 People love their opinions and often make their consumption choices in direct correlation. Superhero arguments aside, the reality is sources play a huge role in the acceptance of their content. Whether it’s The New York Times versus The Wall Street Journal, CNN versus Fox News, or Marvel versus D.C., Americans are highly-opinionated, picky, and skeptical about the information they ingest, especially depending on where they get it. Good luck convincing Uncle Earl at the barbecue that your favorite news blog is better than his trusty channel-of-choice.

During a tumultuous and politically-polarized 2020 election season, Gallup and the Knight Foundation released a study, NewsLens 2020: How Americans Process the News, that measured US attitudes toward different online news sources. The purpose was to examine the extent partisanship played in how people engaged with online news content and to deduce whether solid journalism could cross the political divide.

To measure engagement, Gallup and Knight used an experimental news platform and aggregator originally developed in 2017. The experiment conditions were simple: randomly feed more than 1,500 partisan readers articles in both natural and blinded conditions (labeled or unlabeled with source cues). Content was supplied from Democratic-leaning, Republican-leaning and no-lean sources. More than 44,000 article clicks and 27,000 ratings were registered. The results were published with the hope of providing useful insights to journalists, policymakers and academia.

Let’s dig in and snack on a few of the findings, shall we?

Surprisingly, despite their political leanings, readers chose content from both sympathetic and adversarial sources, even when source cues were visible.

In the natural condition, out of every 20 articles served, the click rate of users with partisan commitments registered:

In the blinded condition, the click rate demonstrated a marginal difference:

Defying the theory of cognitive dissonance, the study found that while partisan selective engagement was present, the margin of selective exposure was modest. With the source visible, out of an average 100 articles, a hypothetical partisan user chose 36 from sympathetic outlets, 33 from no-lean channels, and 31 from politically adversarial sources. Gallup and Knight concluded that regardless of political affiliations, readers were not inclined to remain within their own echo chambers.

The Messenger Carries More Weight than the Message

With the overwhelming volume of news available today, a news source and its agreeableness to the user often dictates the perceived level of credibility more than the content itself. Think about your own political stance and how just the mention of CNN, MSNBC, Newsmax or Fox News might immediately frame how you would judge their content.

NewsLens examined reader ratings of news stories and discovered that when source labels were hidden, users gave articles from politically sympathetic news sources a higher rating versus adversarial outlets. However, readers gave even higher ratings when source cues were visible. Displaying the news outlet contributed to more than half of the variance in user ratings between “friendly” and “hostile” news sources. The takeaway: for readers with a defined political stance - the specific news outlets shaped their impression of the material more than the actual content itself.

As readers, we often subconsciously judge news stories across a range of benchmarks:

NewsLens examined whether readers distinguished between these various components using a five-star rating system. Readers rated articles similarly across all five criteria, with half of the content receiving the same rating across all categories. However, using a control variable in the model that factored in the relationship between journalistic quality and the residuals of each criteria allowed NewsLens to discover a statistically significant and positive association between personal relevance and perceived journalistic quality.

With all factors considered, readers responded more favorably to material that was “covered in a way that mattered to them,” thus boosting perceived journalistic quality of the material.

The NewsLens report makes it crystal clear: partisanship strongly informed how open and receptive readers were to news stories based on the outlets they come from. However, some common ground remains — especially for what readers judge as good journalism. The NewsLens findings are insightful and we invite you to check out the actual report to dig further into the findings and better understand how end users engage with online news.

Now, only one question remains…

Are you Team Marvel or D.C.?

Want to try the original news media video workspace for yourself? Try us free for 7 days to search and clip the biggest news moments as they happen.