SnapStream 9.4 brings you a new clipping interface, pre-roll and post-roll branding on clips, integration with Kaltura, and many other bug fixes and improvements. You can see these new features in action by watching our on-demand webinar. Here’s what we’ve added and improved:

A few of the highlights: 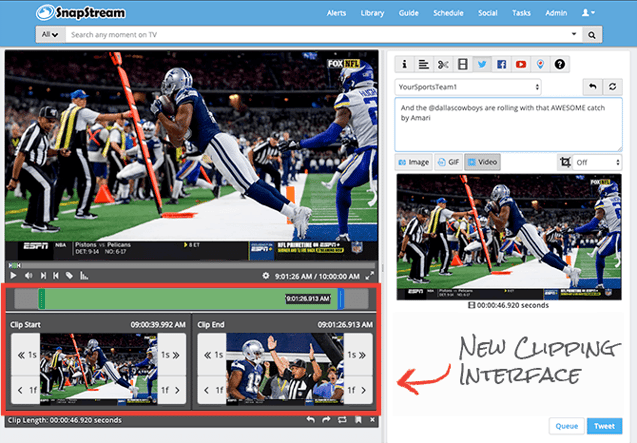 SnapStream 9.4’s new, snappier clipping interface will look familiar to former SnappyTV users. It gives you more fine-tuned control of in and out points during clip creation. You can configure SnapStream to automatically create an out point once you pick an in point (you can customize this—for example, you can set the automatic out point to occur after 10 seconds each time). Then, refine that out point and you’re done.

The software will also show you a zooming trackbar that automatically sizes to the length of that clip. You can then go forward or backward by frame or second. The in and out point thumbnails allow you to quickly preview the clip’s start and end frames. You can also loop the whole clip or loop the last 2 seconds.

To begin, use your mouse or keyboard to select an in point on a video.

Pre-roll and Post-roll Branding on Clips 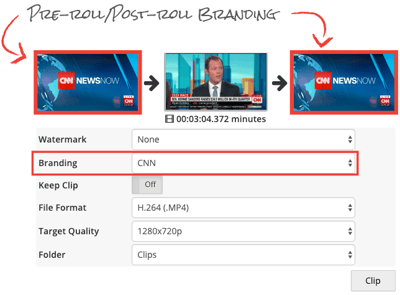 Give your brand one look in one place. With SnapStream 9.4, you can easily add custom branding, such as your company’s video intro, to your clips—no need to spend time using an additional video editor.

Simply upload and save your desired brandings for pre-rolls and post-rolls. Then, select the specific brandings you want to use from a drop-down menu as you create clips.

To get started, go to the “Admin” tab and choose “Brandings” on the left-hand menu.

Natively export your clips in SnapStream to Kaltura. Kaltura is our newest integration with an OVP. SnapStream now has native support for 14 cloud storage, OVP, CDN, and MAM services—and is always adding more based on customer requests.

To start using our newest integration, go to SnapStream and set up Kaltura as an external account. Don’t use Kaltura, but are curious? Learn more.

SnapStream 9.4 has many other bug fixes and improvements, like updates to the clipping hotkeys and the option to auto-minimize task pop-ups. Please read the full release notes.

(Usually 1 hour)
SnapStream’s support team will perform the upgrade via a remote session. 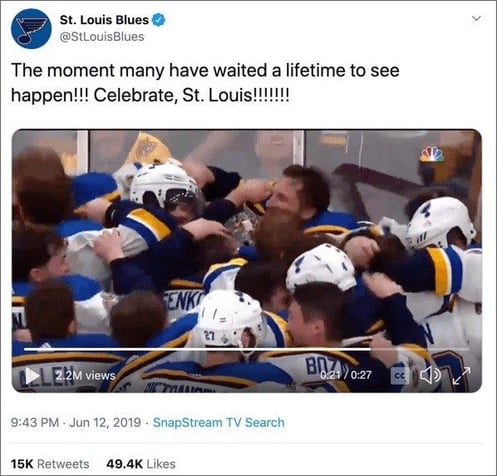 Ask These 3 Questions During Your Search for a SnappyTV Alternative 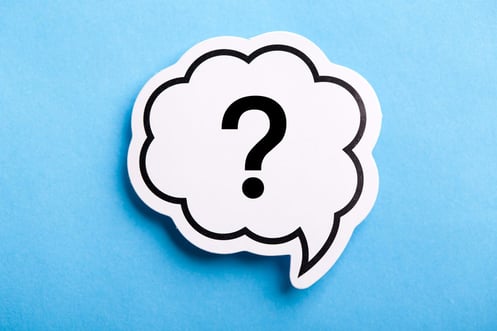 SnappyTV is going away December 31, 2019—meaning users have just several weeks left to find an alternative (LiveCut, the tool Twitter is replacing SnappyTV with, has limited functionality).

You should ask these three questions as you search for your new solution.

What kind of streams does this tool support?

Depending on your organization’s needs, you might use either RTMP or HLS streams, or both. However, Twitter LiveCut doesn’t support HLS streams—it only supports RTMP streams.

When doing your research, ask what streams the product you’re considering supports. Having the option to use multiple types of streams gives you and your team flexibility.

Does this tool have broad native support for CDNs and OVPs?

You might also want to be able to natively export the clips you create to a variety of third-party services, such as Dropbox, Google Drive, and YouTube. Twitter LiveCut does not support natively exporting to any third-party platforms.

If you need to use OVP, CDN, and MAM services, make sure the tool you’re considering natively integrates with them. That way, you won’t have to resort to manually downloading clips and then uploading them to third-party services.

Does this tool record TV in addition to live video? 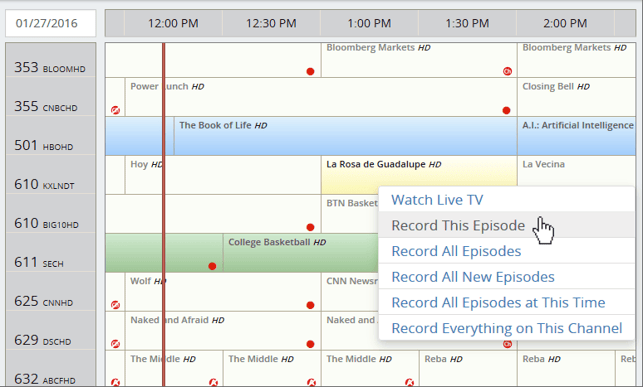 Having recordings of broadcast TV in addition to recordings of your own video feeds can give you more content to use. You can bolster your organization’s social media accounts by creating and posting video clips, GIFs, and screenshots from your own feeds as well as from broadcast TV.

Make sure that the tool you’re evaluating has a built-in Electronic Program Guide (EPG) to easily schedule recordings of different channels. Closed caption-based search is another powerful feature. It can make finding great content easy.

For example, say a leader at your organization gets invited as a guest on a news program. A tool that enables you to search through the closed captioning data to find that TV appearance, create a clip of it, and share that clip to your organization’s social media accounts can ultimately lead to more engagement from your followers.