What I love about working at SnapStream is getting to see what people DO with our software. Here, Daniel Freed shows us a bona fide example of user-generated content. You have to watch the introductory video (below) that he recently put together using SnapStream.

For the past few years, Daniel Freed has been honing his skills at harnessing SnapStream for comedic purposes while working at Current TV's clip show, infoMania. As the show's supervising producer, he figured out how to integrate the technology into the clip show's workflow.

The tagline for infoMania says it all: "Chewing up the week's media so we can regurgitate it, half-digested, into your mouth." Mmm, Yummy. But before the pundits can chew out the media, they have to first find the hot trending topics.

During that process, TV Search technology becomes a rich source of inspiration. It's like giving squishy Play-Doh to a young child and saying "make something."

In the hands of talented writers, and producers like Daniel, the editable, linkable and clippable substance (of television) can be played with and molded.

But to these creatives' credit, you won't find imagination for sale on our products page.

Currently, Daniel is looking for work on other shows, and he says if SnapStream is involved (or even potentially), he would love to continue creating fresh content with this technology. For a knee-slapping good chuckle, check out some more of Daniel's work, on his page and on Hulu.

Is Apple's iPad the supernova of tech-launch publicity?

We took it to our TV Trends analytics to investigate the uptick of buzz surrounding the iPad, which hits the market tomorrow. The forecast calls for an explosive spike in the media frenzy as users get their hands on experimenting with the highly anticipated Apple tablet. This Wednesday's episode of Modern Family indicates that it's going to be a full-on mob scene. Brilliant stroke of product placement, I might add. 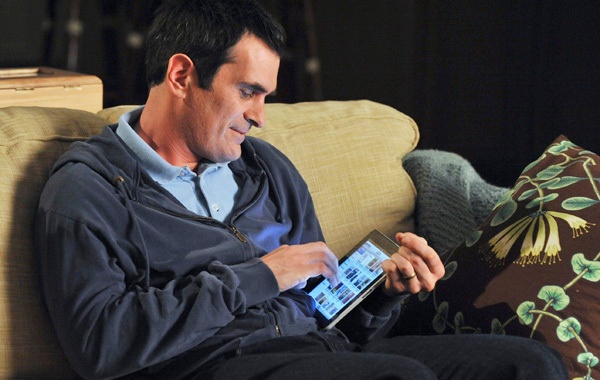 Let's conduct a side-by-side comparison next to other major tech product launches from recent history to see where the iPad stands. If I've missed any big debuts, you can plug in keywords yourself on the TV Trends database.

Based on our data history, the iPad is positioned to be the overwhelming winner in garnering extensive interest from broadcast media. We will continue to monitor how the world reacts to the iPad post-release.

Click the graph to manipulate the search and view specific channel sources.

Before we started tracking TV trends in October 2008, there are some prime dates from recent memory that would be cool to look at as a frame of reference. These hallmark technology events generate contagious excitement in the media.

Global DVD sales are projected to decline by 12% this year, compared to 9% in 2009, according to a recent report from Strategy Analytics in Home Media Magazine. Even with Blu-ray expected to rake in $6.5 billion in worldwide sales, it won’t be enough to sustain or regain the industry’s momentum. 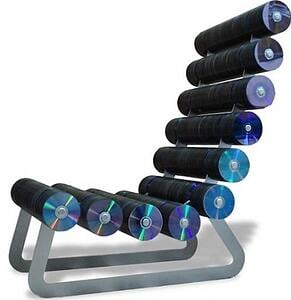 No surprise here, with all things digital these days. At SnapStream, we have been early proponents of digital media delivery. The same way iTunes flipped the music industry; DVR and VOD technology are changing the game for Hollywood, which has been slower on the uptake. It’s time to get with the program.

Going digital is right on track with going green; it’s like going paperless. And who has the space for masses of old CDs and DVDs, right? Upload this stuff to your SnapStream archive of however-many-terabytes and eliminate the needless clutter. Reinvent it.

Following this eco trend, every week, I’ll be featuring unique recycled art made out of the nostalgic discs of yesteryear.

If you come up with something cool, send me a pic and I’ll post it! rachel@snapstream.com

Another use for that outdated VCR

At the risk of becoming the official "In memory of VHS!" blog, if you don't know what I'm talking about), here's another use for that old VCR when you replace it with a SnapStream Server or a SnapStream Mini:

How to make a VHS Video Toaster (on Instructables.com)

VHS is memorialized... in craft.

As I wrote in an earlier blog post, a lot of our customers drop their VCRs and VHS tapes in favor of recording and searching TV with a SnapStream Server. So we end up seeing a lot of VCRs and VHS cassettes tapes. A whole lot.

If any of our customers were worried about what they were going to do with those VCRs and VHS cassette decks, this should give them some ideas:

Photographs (all from Etsy.com):

Background: SnapStream's Enterprise TV Server is currently be used by television stations for "airchecks". An aircheck is the process by which a television station records and searches past television broadcasts for the purposes of competitive intelligence, research, and FCC compliance. Today, April 1, 2008, SnapStream is announcing an exciting new addition to its television search technologies!
Embed this video in your blog.
SnapStream Media Launches Enterprise TV with BearCheck™ Technology
Remove the fear of watching TV by automatically being alerted to bears on the screen.

Houston, April 1, 2008- SnapStream Media, Inc. announced today the addition of the patented BearCheck™ technology to its Enterprise TV Server solution. In addition to recording and searching over 3000 hours of television across 10 tuners, the Enterprise Server can now detect and alert the viewer to the presence of bears on the screen. Handy for organizations that have an unusual aversion to the pictures of bears, BearCheck™ takes all of the worry out of the TV viewing experience.

Available as a free upgrade to all Enterprise TV servers, BearCheck™ may be available for download in the future.

To embed this video in your blog, use this html code: