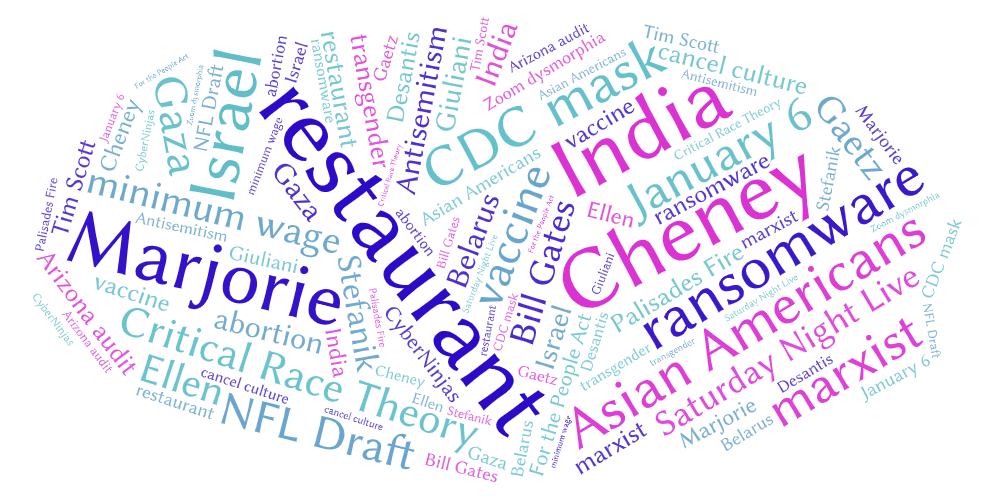 Each customer uses our news media video workspace in their own way, but it's always easy to see when major moments get everyone's attention. And May 2021 was chock full of big news stories -- you know, just like every other month before it in recent memory.

We're back at it this month looking at the top search topics in May. From May 1 through May 27, SnapStream users ran 32,240 search queries. Below are some of the hottest search topics of the month.

Restaurants and minimum wage - several restaurants complained of worker shortages as COVID restrictions lifted. For many chains, this brought to a head a years-long battle over wages in the restaurant industry, with some - including Chipotle and McDonald's - ultimately announcing wage increases that are likely to force others in the space to follow suit.

VIDEO: 🇺🇸 South Floridian Deatrice Edie and her McDonald's colleagues are on strike for a $15 per hour minimum wage. Several US retail giants and fast food chains have recently raised their minimum wages to reach or exceed that rate, including Chipotle, Target and Amazon pic.twitter.com/qTDP0Hiw9o

Asian Americans - in addition to May being Asian/Pacific American Heritage Month,  signed the bipartisan-supported COVID-19 Hate Crimes Act into law. The legislation comes in the wake of increased violence toward Asian Americans throughout the pandemic.

January 6 - Guys - did something happen on January 6 this year? Guess we'll find out, maybe. The date of the insurrection was back on everyone's radars as the House passed a bill to investigate the attack on the Capitol.

He says: "At the heart of this recommendation by the Democrats, is that they would like to continue to debate things that occurred in the past." pic.twitter.com/B9PbqDs77k

Cheney and Marjorie - raise your hand if you'd thought much about Liz Cheney or Marjorie Taylor Greene prior to 2021. Yeah...us either.

Both made headlines in May, with Rep. Cheney in the spotlight for being ousted from her House leadership post by fellow GOP members. Her transgression? Refusing to perpetuate the false idea that the presidential election was rigged.

At the other end of the GOP spectrum was Rep. Greene, who continues to snag the spotlight with her fringe viewpoints. Just when we thought her statement about Jewish space lasers was peak MTG, she one-upped herself this month, making waves by comparing House floor mask mandates to the Holocaust.

The news is WILD, y'all.

Can't wait to see what captures everyone's attention next month!