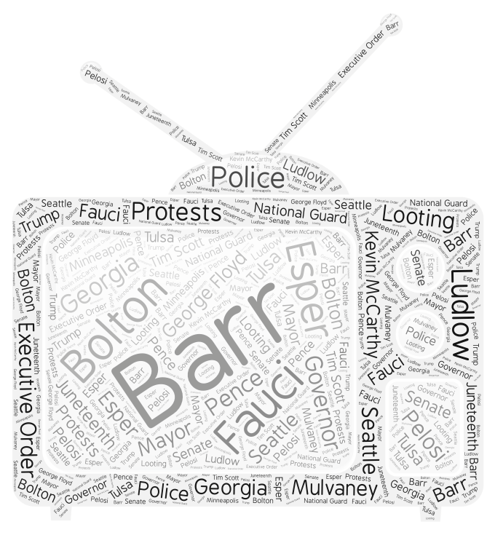 Each customer uses our news media video workspace in their own way, but it's always easy to see when trending moments command universal attention. As usual, June 2021 was packed with big news stories and our customers were all over them. Content producers were relentless in their quest to curate powerful video moments.

Below are some of the major search topics of the month.

George Floyd - For his role in the murder of George Floyd, former police officer, Derek Chauvin, was sentenced to 22.5 years in prison. Darnella Frazier, the teen who recorded the powerful and tragic video was awarded a Pulitzer Prize Special Citation for "for courageously recording... a video that spurred protests against police brutality around the world, highlighting the crucial role of citizens in journalists' quest for truth and justice."

BREAKING: Derek Chauvin sentenced to 22.5 years in the murder of George Floyd.

"This is based on your abuse of a position of trust and authority and also the particularly cruelty shown to George Floyd," the judge says.https://t.co/AeNM5H2wVT pic.twitter.com/vjOqC5dSne

Juneteenth - After passing through both the Senate and the House, President Biden signed a law making Juneteenth a federal holiday. The law enshrines June 19 as a day for the nation to commemorate the belated end of slavery in the United States.

"Juneteenth marks both the long, hard night of slavery and subjugation, and a promise of a brighter morning to come. This is a day of profound, in my view, profound weight, and profound power," President Biden says before signing a bill making Juneteenth a federal holiday pic.twitter.com/NCRwNkl7XN

Georgia - Attorney General Garland announced the Justice Department is suing Georgia for introducing new voting restrictions. Garland says the laws “were enacted with the purpose of denying or abridging the right of Black Georgians to vote.”

BREAKING: Attorney General Garland announces Justice Department is suing Georgia for its new voting laws, which he says "were enacted with the purpose of denying or abridging the right of Black Georgians to vote" https://t.co/Nj065CIsxp pic.twitter.com/nUTAIFpG41

And That’s Not All

June proved, once again, just how powerful video moments can be. So, keep searching, keep snapping, and we look forward to seeing what captures everyone's attention next month.