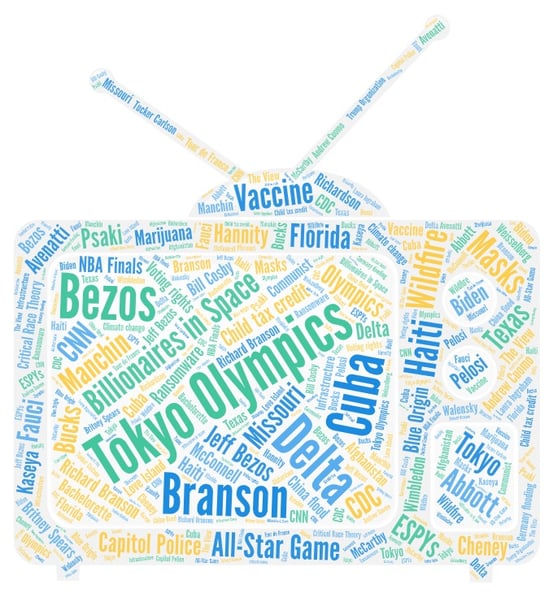 Each customer uses our news media video workspace in their own way, but it's always easy to see when trending moments command universal attention (you know, like billionaires heading to space).

As usual, July 2021 was packed with big news stories and our customers were all over them. Content producers were relentless in their quest to curate powerful video moments.

For the month of July, SnapStream users conducted 31,687 searches about people and events around the globe. Let's check out some of the biggest search topics.

Tokyo Olympics - After an extra year of waiting, the Summer Olympics finally returned, albeit with adjustments for health and safety. Gone were the roaring crowds of fans from around the globe, but that didn't stop folks from watching and delivering commentary. From hot takes on Simone Biles' decision to opt out of the team competition to Snoop Dogg and Kevin Hart's comedic takes on every event, gold-medal-worthy moments were everywhere.

With her seventh career medal, #SimoneBiles ties the record for the most Olympic medals won by a @TeamUSA gymnast. 👏 #Tokyo2020 pic.twitter.com/kGMxsR02q6

Climate Change, Floods and Wildfires - listing the places NOT experiencing floods, wildfires, and other climate change-driven events might take less time than enumerating the ones that are. Oh, and let's not forget that July was the month that a burst pipe literally set the ocean on fire.

A look at all the active wildfires today across the United States and Canada. #Wildfires pic.twitter.com/QJmzmWPBBh

Billionaires, Bezos and Branson - This century's space race is being driven by billionaires. While things were heating up in July here on the ground, Richard Branson and Jeff Bezos set their sights on the sky. Branson became the first person to ride into space on a rocket he helped fund. Bezos took flight just over a week later.

And That’s Not All

Lots to see in July, with powerful video moments to capture all over the world.  So, keep searching, keep snapping, and we look forward to seeing what captures everyone's attention next month.