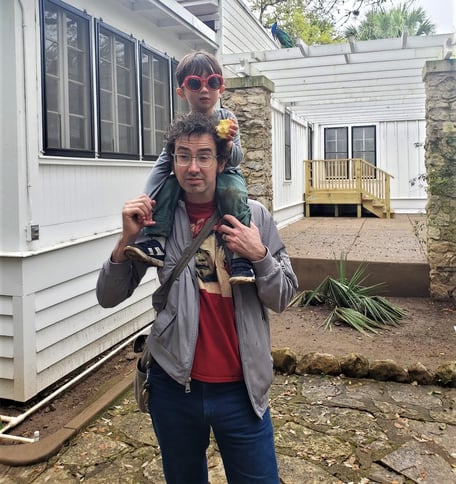 Spending time with my kiddo

How did you find SnapStream?

When I graduated from Rice in 2002, I honestly didn’t have particular career aspirations. I ended up back at Rice in the Ecology department as a lab technician. I had friends who studied computer science, and one ended up with a position at SnapStream. My lab tech position was based on a grant that was expiring, so I decided to connect with SnapStream and was hired in technical support.

What is your role here?

How have you grown with SnapStream?

I’ve definitely grown alongside our products. I didn’t have a background in the corporate world or in technical support, so I really had to learn and figure things out as I went along. I learned how to develop rapport with customers, but as we grew, the support team needed more structure. In 2013 I became the support manager, and in 2018 I moved over to pre-sales engineer. I never expected to work in sales, but I really enjoy it and love talking to people. I feel that my real area of growth has been learning how to jump into conversations with people I don’t know and being able to communicate effectively.

What is your favorite thing about SnapStream?

It’s a small company and there are a lot of opportunities to be creative. Basically, if you want to do something, you can do it. There’s not a lot of bureaucracy or roadblocks that could stop you from accomplishing something.

What do you like to do when you aren’t at SnapStream?

I’m a semi-professional musician as I’ve played in rock bands for about 20 years. I also used to be a music critic for the Houston Press, Austin Chronicle and Houston Chronicle. I’m in a heavy metal band in Houston called Omotai and I have a project in Austin called Mister Smile. I call my Austin project a fake jazz band, we play mostly rock improv.