(First time visitors: Welcome to SnapStream! We make TV search software used by organizations, like the Daily Show, to search inside TV shows. And it's not too expensive, starting at $2,000. Read on or learn more about our products.)

At SnapStream we’ve been hanging onto every word uttered on traditional TV by talking heads and news anchors on major network channels. The data we gathered with SnapStream TV Trends in 2009 gave us an exciting glimpse of the year in television.

In case you're new here, you might be wondering, "What is SnapStream TV Trends?" It's a service we run that lets you see how often words are mentioned, over time, on national TV news. We record and analyze transcripts from national TV news programs on ABC, CBS, NBC, FOX, MSNBC and CNN and it's all powered by SnapStream's TV search technology.

This probably comes as no surprise to anyone: the death of Michael Jackson was easily the most spiky news of the year. In the month between June 26, the day after the King of Pop died, and July 25, “Michael Jackson” was mentioned more than ten times as often as “Obama” in television news.

Overall, the top ten spiking terms in television this year: 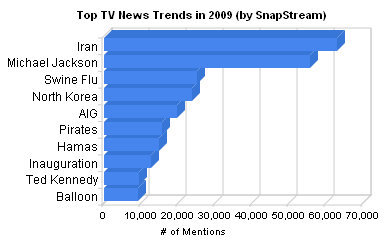 In 2009, Twitter became a staple of traditional television -- as channel for two way communication, as a source of breaking news, and simply as a source for what people were saying about a particular topic.

Search for “Twitter” in Snapstream TV Trends and you’ll see that news and current events TV programs used the word “Twitter” in their programming three times more often in December 2009 than they did in late 2008 and January 2009. 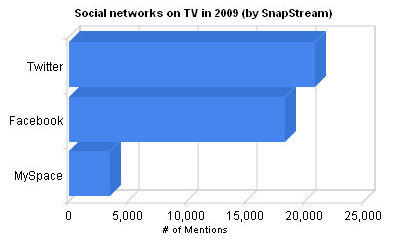 So even though Facebook has scads more users (Wikipedia says it's Facebook's 350M vs. Twitter's 45M), you can see that twitter gets more mentions of TV.

So maybe Dave Winer is right and twitter is "a dress rehearsal for the news system of the future"!

The economy reigned the news last year, but in 2009, health care was on the lips of news programs everywhere. Compare "health care" and "economy" in Snapstream TV Trends and you can see the economy dominated the national dialog at the beginning of the 2009, but by the end of the year mentions of health-care topics far eclipsed the economy: 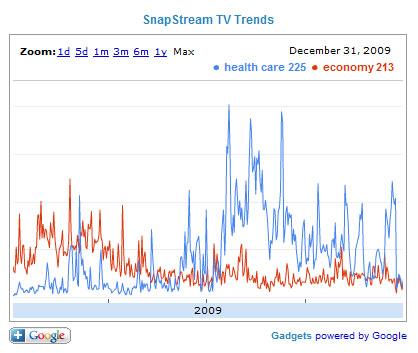 We all know the media loves a good scandal, and 2009 was rife with scandal. We learned politicians like Mark Sanford and John Edwards strayed from their wives as well as sports superstar Tiger Woods and late night TV host David Letterman. It seems like fidelity was in short supply.

The media treats each scandal differently, following every lead and looking for the best angle to capture viewer attention. It would appear that the perpetrator is a sitting duck once his secret is out. All he can do is try not to say anything incriminating and hope the story dies, right? Not so. Compare the David Letterman and Tiger Woods scandals: 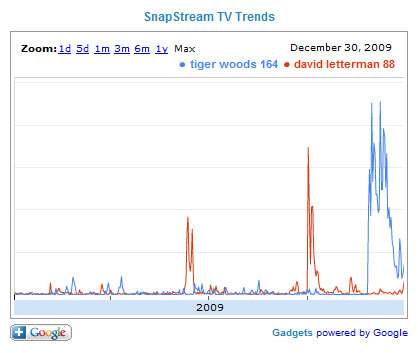 On the surface these stories are remarkably similar. Both involve major celebrities. Both involve multiple transgressions and married men. And yet David Letterman didn't get nearly as much media scrutiny as Tiger Woods got and is still getting, despite the added complexity of blackmail in David Letterman's case. Strikingly, David Letterman got almost as much heat for making fun of Sarah Palin as for sleeping with his staff.

Moral of the story: When caught with your pants down, what you do and how you present yourself determines how much the media is willing to forgive, and how quickly they will forget.

Wonder what else is driving national television trends? Check out the Snapstream TV Trends tool to see for yourself and share any interesting observations you make in the comments below.

This entry was posted on Wednesday, December 30, 2009 at 12:36 AM. You can follow any responses to this entry through the RSS feed.