SnapStream TV Search in the World of Politics 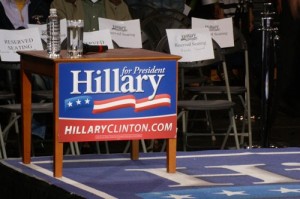 In the fast-moving world of politics, being able to monitor television media's reaction to political issues – in real time - and the ability to respond quickly and appropriately are key. In the case studies below, we looked into how SnapStream's TV search technology is used to solve media monitoring problems in the realm of politics – first for a candidate running for president, and the second, for a political video blogger.

Monitoring Television in Hillary Clinton's Race to the White House The Clinton Campaign's switch from a combination of VCRs, DVRs and clipping services to the SnapStream Enterprise TV search appliance greatly improved their effectiveness and timeliness in reacting to issues in the fast-moving and complex world of political campaigns.

The Jed Report's Search for Timely Political Television: For Jed Lewison, the influential political video blogger behind the Jed Report and Daily Kos TV, SnapStream Enterprise gave him the ability to quickly and easily find and work with pertinent network TV clips, saving him both time and hassle. It enables him to focus on what was most important to him in his video blogs: the content itself.

This entry was posted on Thursday, October 30, 2008 at 08:46 PM. You can follow any responses to this entry through the RSS feed.